Masai Mara National Reserve (1672 sq. km)
About two hundred seventy-five (275) kilometers west of Nairobi, Masai Mara is part of the Serengeti ecosystem in Northern Tanzania. It has existed as a game conservation area since 1889, when it was part of the large Southern Game Reserve stretching down the Kenya-Tanzania border to the present Amboseli National Park. However, it was confirmed as a Game Reserve (now National Reserve) in 1974. The Reserve consists of well-watered grassland plains, standing at an altitude of 1650m and crossed by two permanent rivers, the Mara and Talek.

The land teams with beasts of chase, infinite in numbers and incredible variety. It holds the fiercest beasts of raving, and the fleetest and most timid of those things that live in undying fear of talon and fang. It holds the largest and the smallest of hoofed animals. It holds the mightiest creatures that tread the earth or swim in the rivers”.

The great variety of nearly all plains game offer a wide choice of food for the predatory lion, leopard, cheetah, hyena, wild-dog, jackals and thousands of other lower carnivores. It is a self-contained world where survival of the fittest is the order of the day. Mara River which is frequently flooded during the rains houses schools of hippo and large colonies of crocodile.

But all this richness of fauna and unspoilt life of Africa, decorated by the culturally rich Maasai people, is secondary to the Mara’s major attraction – the world famous and most spectacular annual animal mass migration of nearly two million wildebeest and Zebra from Serengeti National Park in Tanzania to the Reserve (July to September) and back to Serengeti in January/February. Every year, the herd’s bull leaders taste the wind at the beginning of the long rains and they decide to lead their herds towards Lake Victoria in the West. The herds turn northwards before reaching the lake and cross the Mara River into Kenya looking for fresh pastures in the Masai Mara. When the herd leaders smell the short rains of October, they command their herds south-eastwards across Olduvai Gorge back to Serengeti. It was in the Olduvai Gorge where Dr. Louis Leaky discovered the remains of early man and some bones of wildebeest all dating back to two million years, thus proving that the Serengeti-Mara wildebeest migration has existed for millions of years. The migrating animals are followed by their attendant predators, hyena, lion, wild dog and vultures. Thousand of them fall prey to the predators while many more die in the Mara floods while crossing the river. Visitors to Mara in August through September will certainly see the splendor of this natural phenomena happening as it were hundred years ago. Apart from the migratory animals Masai Mara is rich in resident game with over 95 species recorded in the Reserve.

All the commonly seen mammals of Kenya are found in the Reserve in addition to the famous Hot Air balloon flying. The only exceptions being those that live in dry areas or are restricted to the northern parts of the country such as Reticulated giraffe, Grevy Zebra, Hunter’s antelope and Tiang. It has the largest population of lions in the country. Visitors to the Reserve will always see big herds of elephant, buffalo, Topi, Maasai giraffe, Gazelle, Zebra, Coke’s hartebeest, Cheetah, Spotted hyena, Bat-eared fox, Black-backed and Side-striped Jackals, Baboons and many others. 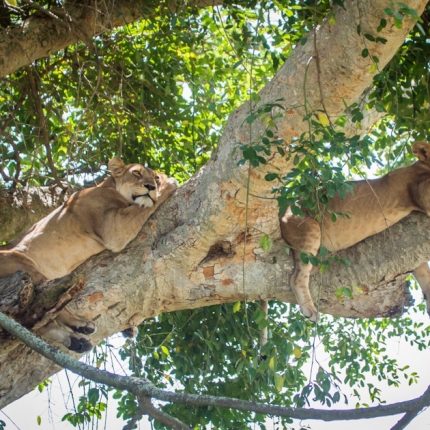 To provide a holistic, tailored quality service and an unsurpassed safari experience for travelers visiting Uganda, Tanzania, Kenya, and Rwanda

To receive updates about our adventures